The new digital light novel publishers J-Novel Club have announced that they are now offering two more titles to their readers. The first is Grimgar of Fantasy and Ash, the very same that inspired this year’s anime, added to the service alongside I Saved Too Many Girls and Caused the Apocalypse. So, what are you waiting for? Go ahead and get lost in a good book!

J-Novel Club have both series planned for future release as eBooks, and describe each one as follows:

Why are we doing this…?

When Haruhiro came to, he was in the darkness. Not knowing why was he here, or where “here” even was. With him were others who also remembered little more than their own names. What they found when they came out of the underground was a world that was ‘just like a game.’ In order to survive, Haruhiro forms a party with others in the same situation as him, learns skills, and takes his first steps forward into the world of Grimgar as a trainee volunteer soldier.

Not knowing what awaits him… This is a tale of adventure born from the ashes. 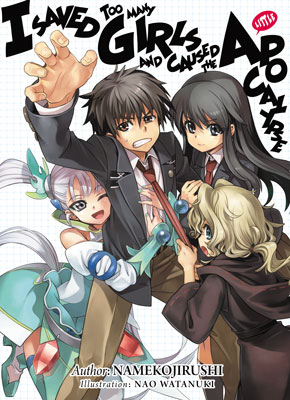 Rekka Namidare was a normal boy until his sixteenth birthday. Then a girl suddenly appears from his future, warning him that he’ll somehow start an interstellar war! It turns out Rekka hails from a special bloodline that’s destined to get caught up in all kinds of trouble. Whenever a story’s heroine is in dire need, Rekka will be given one last chance to save her. And in the future, Rekka will have saved so many girls that their jealous love for him will cause the apocalypse!


Noticing that most of the latest and hottest light novels in Japan just weren’t getting English releases for international fans, Sam Pinansky founded the J-Novel Club, which launched with its first batch of chapters this month. The company wants to release new novels in weekly installments for members worldwide, on their website and app for iOS and Android.

For $4.50 (US) a month or $54 a year, subscribers will be given access to a chapter a week across all titles in the J-Novel Club library. The first part of each novel will be free to anyone who wants a taster of the service, but all subsequent chapters require membership to read. Other perks include access to a members-only forum, and if you’d like to step it up to Premium Membership, the deal gets even sweeter. For $10.95 each month or $120 for a year, you receive a free, finalised eBook each month in addition to all regular membership benefits.