The four-panel manga uses the most basic of frameworks to fire off gags at startling pace, as well as offering unexpected, haiku-like views into life’s little dramas. It’s all on that third step of what’s known as Kishoutenketsu structure; the climax, an unforeseen development. Like or loathe it, the web-yonkoma-turned-anime Pop Team Epic uses the four steps for its own kind of masterful nuts factor. But others, like our five favourite four-panel adaptations, bring us closer to happy reflection, and even meditation.

An assassin, a ninja and a regular idiot girl all attend the same high school. There’s enough hilarity in following the spirals of your thoughts from the premise alone, but there’s a special gut-punch to how the three heroines bounce off each other. To tease its eccentric brand of humour, a seafood sausage is right at the heart of a genuine roll-on-the-floor moment. There’s so much space for laughter in this trio never quite making friends, but learning to live with whatever weird dynamic they’ve fallen into.

When people with a shared love come together, determined to do their best, anything is possible. K-ON! became a beautiful story of that power through music. Experimenting, creating and simply having fun makes Yui, Mio, Ritsu, Tsumugi and Azusa’s futures brighter, because these girls give everything their all. Even when we lack faith in ourselves, like anxious Mio, there’s always someone we can turn to for their faith in us. Just another powerful message of ‘oh, you mean that cute girls show’? Leaning on others doesn’t make us weak. We’re always stronger together.

It looks a little creepy with its real-world object inserts, and it’s so relaxed it threatens to melt into a warm, puddingy puddle of itself, but these are the opposing angles which make Hidamari Sketch so charming. It’s a collage of the curiosities, slip-ups and self-discoveries which define the college years. The very fact this series steps out of the high school droves for something a tad more mature is admirable in and of itself.

I Can’t Understand What My Husband is Saying

Most couples could probably relate to some facet of Kaoru and Hajime’s married life, even if its comedic basis is in the fact that he is an otaku, and she most certainly isn’t. Tenderly walking through the minor disagreements and odd days where you just don’t gel, this show is a celebration of love at its most real, its most mundanely wonderful. 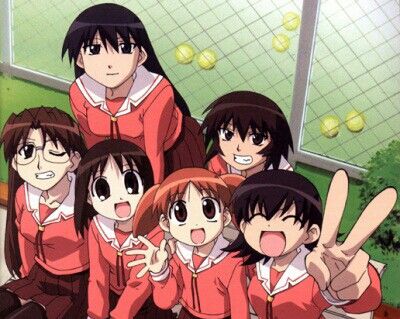 Here’s a sketch show that starts out much like any other; throw together a bunch of misfit, mismatched personalities and take a seat beside them in the lunch room as the fun bubbles away. But somewhere along the line, it becomes something much more. It’s a fond reminder of innocent blunders all written off by the next morning’s bell, so you never knew how much they were helping you grow.

Those are are top five of the tiny-form manga adaptations, each of them close and personal to our hearts for their own unique reasons. But which is the four-panel manga or anime you most treasure? Let us know in the comments, and do enlighten us on any we might be missing.

6 Comments on The pop team: our favourite four-panel anime